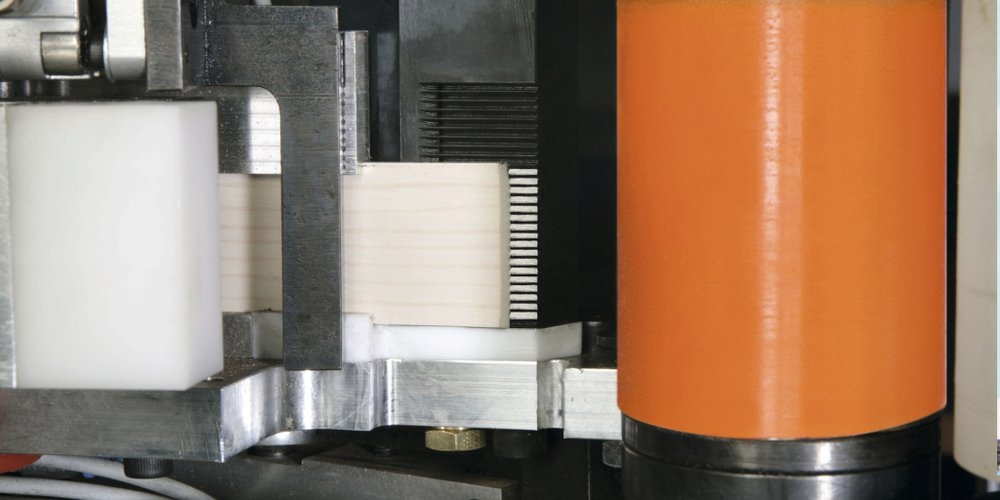 Why Is Glue Type So Important In Contour Edge-Banding?

In this article, we explain the essential part that glue performance plays in the process of continuous roll-on edge-banding.

Traditionally, edge material (clashing) was applied using a glue and clamp process.  Adhesive was applied to the clashing and the panel and the two pieces were then pressed together and held by clamps until the adhesive had set.

In the early 1990s PVC edging became popular due to its durability, low cost and large variety of colours and finishes.  However, traditional clamping methods were too costly for these new materials. Up until this point the through-feed roll-on edge-bander, which was developed in the 1960’s, wasn’t widely used. However, because of PVC edging, it disrupted the industry, and through-feed banding development became essential

An often unappreciated, but critical, part of the success of through-feed edge-banding is the role of the adhesive.  This seemingly innocuous item is crucial to edge-banding performance, but has to meet important criteria to work in an effective way.

Firstly it must have an appropriate ‘open time’. This is the time that the glue remains molten after being applied to the first surface (i.e. the panel) before it forms a skin which then prevents adhesion.

Secondly it must have very fast ‘quenching’ properties. This is the time taken for the adhesive to ‘set’ when the panel and edge-band are pressed together.

Thirdly it must have specific ‘tack strength’ (also called ‘green strength’). This is the instantaneous pull strength of the glue when the panel and edge-band are first pressed together. 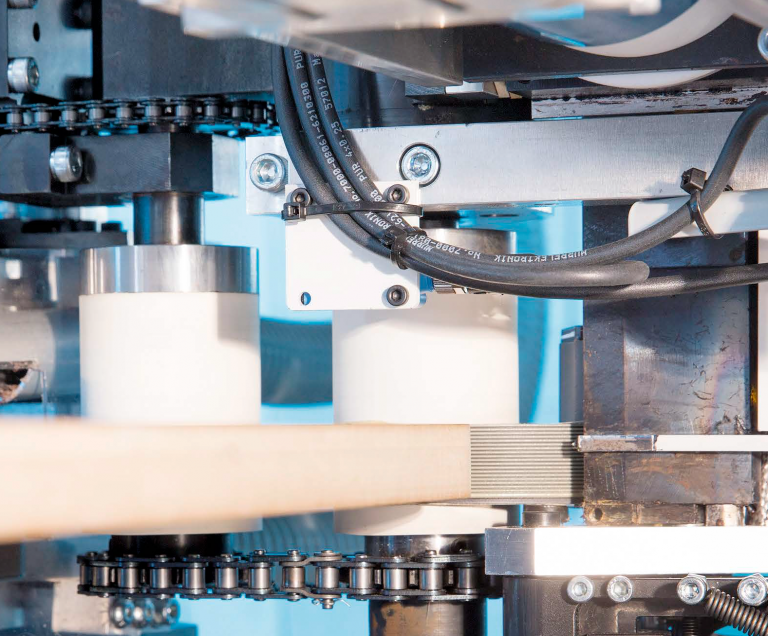 Glue being applied to the band. The glue nozzle is close to application roller

At the first pressure roller, the band and panel are pressed together. At this point the glue needs to quench rapidly. It must also have a high enough tack strength to prevent the band slipping on the panel and to prevent ‘popping’ of the band caused by the second pressure roller bumping up onto the panel.

This is a remarkable feat of adhesive technology, because the rapid quench and tack strength characteristics of the glue work in the opposite way to ‘open time’.

The effects of temperature and other factors

It’s the reason that typical edge-banders are susceptible to changing temperature conditions. In a cold winter factory, the panels are cold and, as a result, the open time of the adhesive is shorter because the panels quench the glue faster. To deal with this problem heated infeed fences are common on straight-line edge-banders.

External effects such as draughts and fans only add to the variable performance of the adhesive.  Bond strength is seriously compromised if the glue skins off before the edge-band and panel are pressed together at the first roller.

See also: Why Contour Edge-Banding Machine Design Is Critical For A Quality Finish

For a contour edge-bander to successfully bend stiff banding around a small radius, the feed rate must be able to be slowed sufficiently to allow the pressure roller to hold the band long enough for the glue to overcome the ‘popping force’ caused by wrapping the band around the small radius. 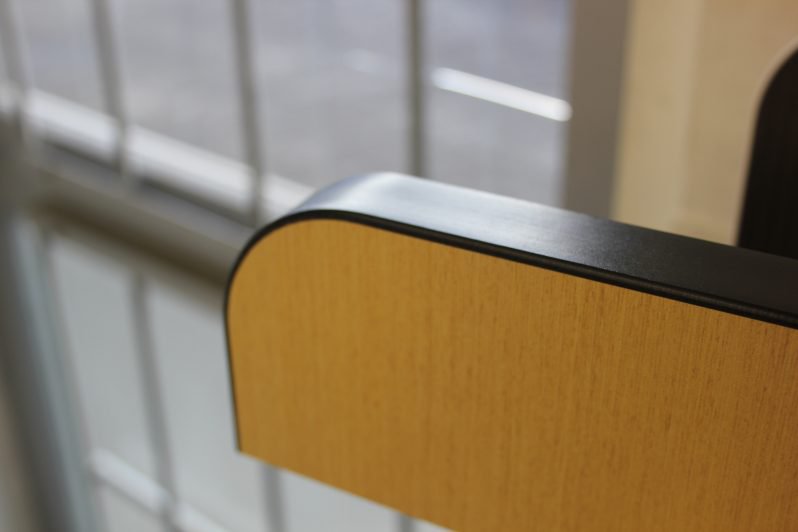 The slow feed rates required to achieve this, mean that most contour edge-banding machines need an external heat source to keep the glue molten and soften the banding.  However, external heat applied to the band or panel works against the quenching effect and compromises the quench time and tack strength.

As with straight line edge-banding, the introduction of external heat sources such as panel heaters, band heaters and glue heaters add more variables. This makes the skill level of the operator especially critical, because they need to be able to interpret edge-band material performance and ambient conditions.

These variables however can be minimised when certain machine characteristics are optimised.

Here’s how to minimise the variables:

In summary, I cannot stress enough how glue quality and characteristics affect the performance of edge-banders.  Selecting the correct glue for your machine, while in some instances may increase adhesive cost, will save considerably cost more in giving easier and better operation of your edge-bander and reduced rejects.

Glue makes up a small fraction of the cost of the raw materials in an edge-banded panel, but plays a big part in achieving a successful and high quality result. While your accountant may question the monthly payment to the adhesive supplier, it’s important to understand that there are far greater costs to your business through production difficulties in using an inappropriate or poor quality glue.