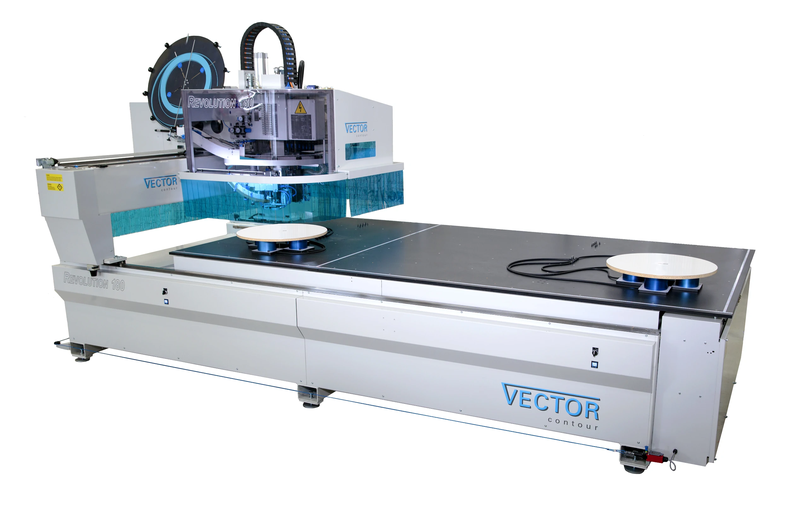 The Vector Contour Revolution 180 literally turns contour edge-banding on its head and represents the first significant development of machinery in the composite board industry since the development of CNC machining centres some 20 years ago, broadening the scope for these products beyond rectangular panels.

The load carrying frame structure is fabricated from heavy plate steel and box section. It is extremely rigid and provides a wide stable support for the Y axis. All motion is carried on highest quality linear prismatic bearing rails.

A further feature of the VECTOR Revolution 180 is that there are no issues with software compatibility with existing or future machines because it requires no programming.

The patented operating system is controlled by an intuitive icon-based touch screen PC with easy operating interface. The machine requires no programming, with the operator only required to make some simple selections such as the starting position.

The rest of the process is performed automatically by the machine controller. The machine will return to the start position ready for the next panel. Common settings for product types such as glue temperatures, start and park positions are able to be saved.

Another innovation of the VECTOR Revolution 180 is the edge feed mechanism which is mounted above the aggregate and coils around a simple winder mechanism. The edge is continuously fed and remains ready for the next workpiece as soon as the end cutter has cut the end of the previous piece. There is no need for expensive and complex edge feeding units to pre-cut lengths for each workpiece.

The VECTOR Revolution 180 incorporates into the trimmer unit, a surface scraper. This unit operates using the patented SideWinder system and is performed simultaneously with all other units, thus carrying on the VECTOR Revolution

180 philosophy of simultaneous processing. The unique design of the surface scraper means it easily handles panels which are not sitting perfectly flat due to bowing or swelling, without damaging the panel edge, but maintaining a perfectly smooth transition between the panel surface and the edge material.

The VECTOR Revolution 180 uses a cartridge and nozzle glue extrusion system which is ideally suited to this contour banding application.

The cartridge glue nozzle is a closed system which only heats the glue as it is used. From the heated face of the cartridge until it is extruded onto the banding, the glue is not exposed to the atmosphere, thus there is no burning of the glue or discolouration. The original colour of the glue is maintained as are the glue properties.

A further benefit of the glue nozzle system is it’s close proximity to the first pressure roller. This means that even when slowing for corners, the glue remains molten until pressed onto the panel by the first pressure roller. This is particularly important when banding tight radiuses due to the reduced feed speed as the glue does not have an opportunity to chill before being pressed onto the panel.

The patented Vector principle means permits much higher edge pressure than is possible on other machines and when combined with the cartridge nozzle system, the result is a thinner glue line and higher adhesion. This is an essential benefit in overcoming banding memory on smaller radiuses.

Of particular note is that the glue is applied to the edge only to the width of the workpiece meaning the overhanging edgeband that is trimmed away is glue-free leaving the cutters clean.

A simple nozzle wiper passes across the nozzle automatically before and after each cycle ensuring the glue nozzle face remains clean.

Changing from one tape size to another is extremely simple with the operator only having to make a simple positive adjustment to the glue height, feed the new width of tape, and adjust the tape guide height. All else is taken care of by the machine.

Glue height is set by positioning a pin in a hole in the index ring, removing any need for fine adjustment.

The workpieces are supported by means of vacuum cups sitting on a large flat bed. This enables absolute flexibility in positioning pods to ensure the workpiece is held securely.

Because there is no routing function on the VECTOR Revolution 180 the vacuum pods do not get damaged, and hence full vacuum is achieved with a 100 m3hr oil vane quiet operating vacuum pump. Power usage is therefore minimal and with no routing dust, maintenance is also minimized. The pump is mounted inside the frame of the machine further reducing noise and avoiding airborne dust.

Exact workpiece positioning is not critical, as the patented VECTOR Revolution 180 operating system is unaffected by panel position.

The joint of the edge where a complete 360 degree edging is required is controlled by a sensor arm. The speed of approach is automatically reduced at a precise distance from the joint and a sensor accurately detects the beginning of the edge which remained untrimmed at the cycle start. The trim cutter then cuts the edge with a bevel, the edge is applied and the top/bottom trimmed leaving a joint of the highest quality.

Where square cornered panels are to be processed the VECTOR Revolution 180 uses special EndPODS. These pods incorporate starting and finishing plates which simulate an extension of the workpiece. The advantage of this system is that it gives a reference for the panel placement and equally importantly provides a straight edge to lay down the initial banding.

This overcomes problems caused by trying to synchronise the glue, banding and pressure exactly on the free corner of a panel. The start and finish plates create a seamless transition of band, glue and pressure onto the corner with no possibility of slipping or crushing of the corner.

Consequently the strength and quality of the edge band to glue joint, at the most vulnerable point – being the corner – is maintained.

Optional AutoTRIM EndPODS are available which automatically flush trim the square corner on completion of the edge while the head is traversing to its next position – thus maintaining the VECTOR Revolution 180 philosophy of simultaneous processing.

The shavings extraction is fully self contained within the machine via a heavy duty 3 phase quiet operating vacuum fan connected to a filter box with an anti-static teflon coated filter element. The filter box is mounted on the end of the carriage and is easily emptied (usually only once per shift) by moving the head to the left hand end of the machine.

This built in extraction eliminates the need to connect into central extraction systems. This therefore reduces cost and increases flexibility when arranging machine placement and ensures statically charged particles are not introduced to central extraction systems. The nozzle gluing system only heats the glue as it is used and so power consumption is very small with typical machine usage less than 10 amps. A 15 amp supply is all that is required. 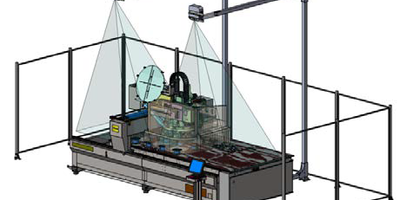 An optional projection system is now available, which can also be retrofitted to existing machines 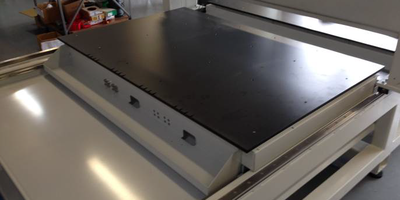 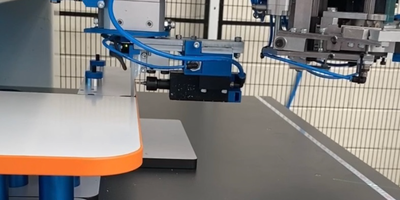 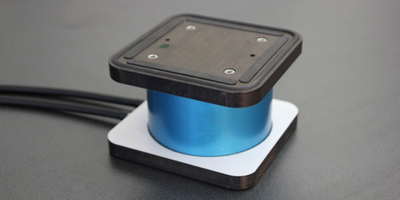